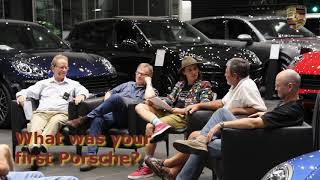 The present Porsche Club Queensland was formed officially in June 1974 after several unsuccessful attempts in previous years. In mid 1965, the first attempt to form the Club was made by Tony Basile and Mick Flashman. On November 28, 1970 the second attempt was made when Greg Riddell organized a meeting at the McDonnell & East car park, North Quay. Foundation members in 1974 included Alan Marrs, Bruce Maclean, Mike Gillies and Porsche spare parts man at Gus McClure’s, Viv Thompson, who suggested the formation of the Club to Mike Gillies in late 1973. As Viv had tabs on most of the Porsche owners around Brisbane, they all eventually made contact via the spare parts counter and the club was formed.

Membership was purely 356 owners in those days - about eight to ten owner/members originally. At one stage there were even four speedsters on the Club register! On August 4, 1974 the Club’s first outing was to Mt Tambourine with nine Porsches attending. To see a 911 on the road then was as rare as seeing a 356 Porsche today. Our first 911 member was Rod Straker (1971 911T Targa) followed closely by well known commercial artist Col Anderson, who designed our Club badge and letterhead. Col owned a 1967 911S Coupe.

Some members who helped the Club move from strength to strength in those early days were our first “new Porsche” member Brien Showyin, Red Ramier (a flamboyant Speedster owner), the very young Mike Gillies, Darryll Birtles, Derek Ellis (Mr. 356) and Garrett Russell (founding editor of Porsche News). On March 24, 1977 we held our first Annual General Meeting (AGM) with the new committee and the birth of “Porsche News” with Garrett Russell. We also made our first Club T-shirts.

Shortly after the Club’s formation, Queensland lost its only Porsche dealership and the committee worked tirelessly to obtain a full service / spare parts facility for Club members. After much liaison with Hamiltons in Melbourne we received good news in September 1977 when the Albion Car Centre was announced as Queensland’s official Porsche dealership.

Club membership then grew to sixteen 356 owners, fifteen 911 owners and two 924 owners. In June, 1979 three members attended the first assembly of Australian Porsche Clubs in Adelaide. The “Nationals” as they were to be known were formed (very similar to the Porsche Parade in the USA On November 25, 1979 the Club held its first motorkhana at Kooralbyn Country Club.

The first formal driver training day was held at Lakeside on April 20, 1980. In Easter 1982, Queensland hosted the 4Th National Meeting of Porsche Clubs on the Gold Coast.

September 1984 saw a membership of 40 cars. A register of members’ cars was established. Later on October 27, we held our 10th Anniversary Dinner at Carindale Tavern, with Alan Jones as guest of honour. In December, the Club travelled to Victoria to see the Sandown round of the World Endurance Sportscar races.

February 12, 1985 saw a move to the Brisbane German Club for Club nights. The Club begins to flourish - 27 Porsches at Macleans Bridge; membership 79 cars; competitive events were becoming very popular. July 10, 1986 saw the Club become an incorporated organisation. In Easter 1987, the Nationals were hosted at the Gold Coast, Jupiter’s Casino (acknowledged as the most successful Nationals to date).

On September 24, 1988 we held a Silver Ball at the Carlton Crest celebrating 25 years of the 911. All proceeds from the evening went to the Blue Nurses Association.

March 1991 saw several members compete in the inaugural Gold Coast Indy Grand Prix Porsche race. While Easter 1992 had the Nationals again run by our club at Jupiter’s, on the Gold Coast.

In 1994 the membership broke the 100 barrier, with 106 cars on the books. Bruce Anderson visited from the USA for a lecture tour here and in New Zealand. Easter 1997 was the first “Porsche Parade of Australia” held at the Novotel Brisbane. Numbers were down, due to competition from the Melbourne AGP, Targa Tasmania and Gold Coast Indy. Ilse Nadele, long time factory representative for all Porsche Clubs, retired from Porsche AG and made the long journey to say farewell to most Queenslanders. The Queensland Club won the State Championship of the Parade for the first time ever.

1998 saw the membership continue to grow, events were well patronised. 50th Anniversary Porsche celebrations in Melbourne were well attended by 43 Club members, who made the 1600 kilometre trip South and celebrate in style. They also enjoyed the biggest Porsche gathering in Australia with over 911 Porsches at Southbank.

By 2002 the Motorsport calendar and attendances had dramatically increased such that these days were now fully self supporting, despite the closure of the iconic Lakeside Circuit. However, by 2008 Lakeside was given a new lease of life as a club level race track and our club was one of the first to take full advantage by adding it to our busy club competition schedule. Events in the competition calendar include circuit sprints (Queensland Raceway, Lakeside and Morgan Park), Motorkhanas, Hillclimbs and the annual Concours. Track day attendances are now seeing up to 80 entrants. For those who don’t know, a Sprint is a race against the clock on a race circuit with other cars on the track at the same time. Sometimes the grouping of the cars can almost generate a “race,” but the main objective is to clock the fastest lap of the day. All cars are classed according to power/weight ratios and every member has a chance at the outright championship.

Today the club has more than 500 individual, family and associate members. Club nights are graciously hosted at both Brisbane and Gold Coast Porsche Centres with attendances regularly exceeding 100 people. Social events are a highlight of our year, culminating in the annual Gala Ball and Motorsport Awards Night. Throughout the year a wide variety of activities from Drive Days (50+ Porsches in convoy over some of South East Queensland’s more challenging roads is an impressive, traffic stopping sight) to movie nights, restaurant nights and picnics in the park.

Over the years our membership communication has matched technological changes and the original brief newsletter has evolved into the bi-monthly, full colour magazine; a state of the art Website (complete with ‘sealed’ members section); regular emails and, when all else fails text messages and even phone calls!

The Club has grown to be a very strong organisation with a very high percentage of active members, not only in competition but also in social events. The Club’s very existence is built around the themes of the enjoyment and driving of Porsches, their maintenance and technical aspects, liaisons with other Clubs and safety and courtesy on the road.